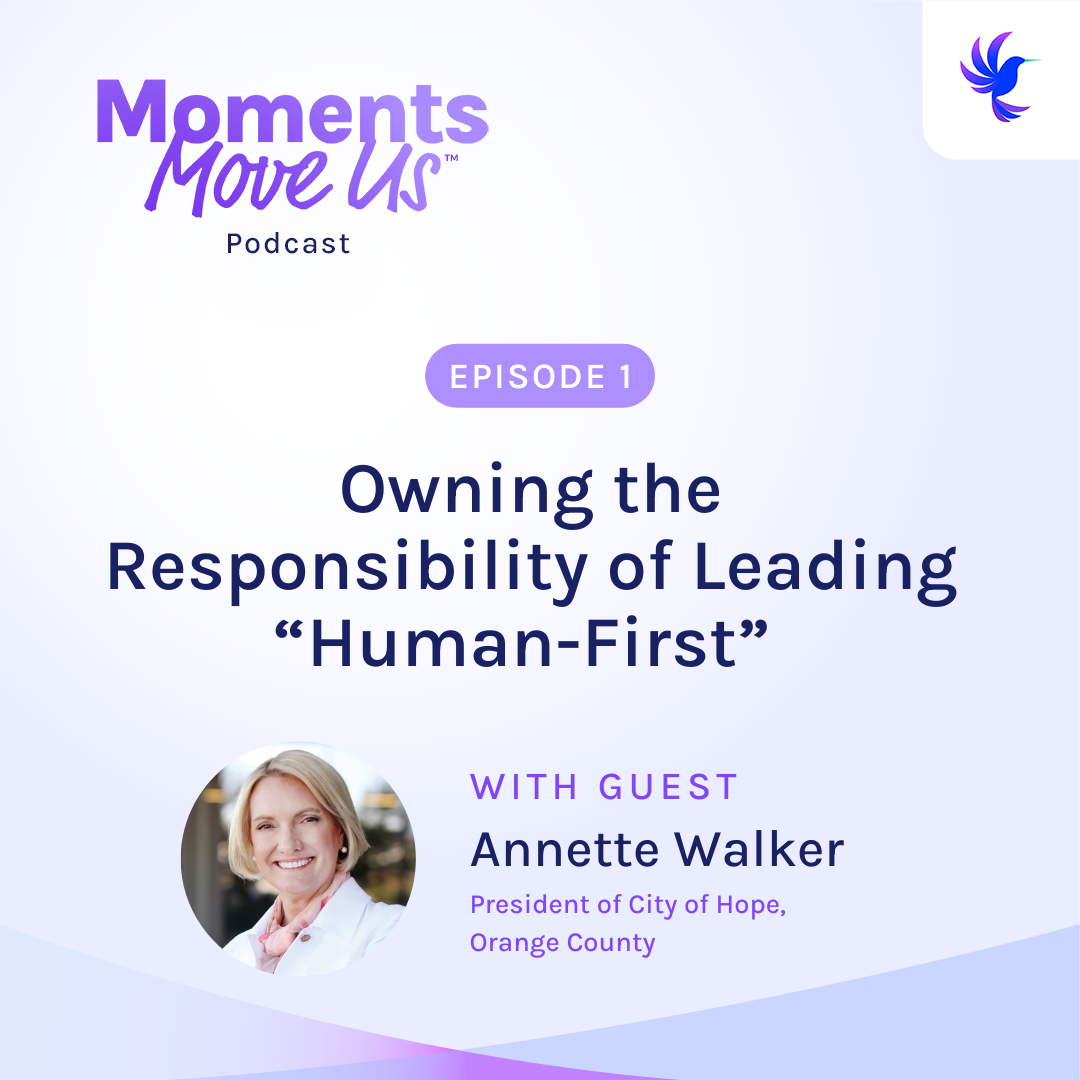 Owning the Responsibility of Leading “Human-First”

with Annette Walker, President of City of Hope, Orange County

Owning the Responsibility of Leading “Human-First”

Welcome to Season 2 of Moments Move Us. To kick us off, we are joined by one of Modern Healthcare’s 100 Most Influential People for 2019, Annette Walker. Annette is President of City of Hope, Orange County, and sees herself as a steward of the organization. She says her purpose is to build the business to make opportunities for others. In this episode, Annette shares her visionary strategy and discusses how leaders can create a legacy of positive impact. As you listen, you’ll learn how to find the balance between vulnerability and strength and hear about the power of resilience.

“[Being named in both the 25 Most Influential Women in Healthcare in the United States and Top 100 People by Modern Healthcare Magazine] meant a lot to me for different reasons. I was so honored to be designated as a female leader. If you had seen the list of the other women that I was included with, it was an honor to be called out or to be designated amongst them. It was also incredibly special to be named one of The Top 100 People for an entirely different reason. It meant that there was no special qualifier or elimination from who could be considered, but that everybody could be considered. When I looked and applied for a position, I never wanted a position because I was a woman; I wanted a position because I was the most qualified and the best person for the job. That award was a kind of recognition showing that it doesn’t matter where you came from, who you are, or what your gender is—you’re in a different class: the best of the best.”

“The nurturing aspect of motherhood is something that is really valuable in the workplace. People want to feel cared for. For instance, when you’re a sponsor, you’re always trying to create situations to will the development and growth of another individual, and it’s the same thing that a mother would do about her children! I think about the building of community—what we do when we plan family events and you try to create an atmosphere of community where people feel included–that’s what great leaders also do. There are so many things that I could go through where I think being a woman has been an asset to my leadership style.”

“Healthcare is unusually rich with moments, and most people think it’s healthcare that provides the moments because of the patients, and that’s true. Earlier this week, I received an email from a person saying that they had been diagnosed with cancer and that they really needed help, and asked if we could get them in. Just this morning, I received an email that said, ‘Oh my gosh, I can’t believe your team! I now have hope,’ and it made my day, and makes everything worth it.”

“When leaders jump around a lot or are inconsistent, people get confused and it’s like being a ping pong ball. Steady direction and clarity and consistency are our strengths! Now, there’s a lot of room for warmth and fun and play in between those lines but finding the balance and inviting people into both of those worlds is important to being successful. You need to have both [direction and vulnerability] and you need to know how far you can color outside the lines. Clarity of expectation is very important. Within that clarity, freedom to execute on those expectations.”

“From 25 years ago, my experiences working in a clinical lab are extremely valuable to me today. That experience I had of seeing how a hospital works from the ground up made me part of that machine, and it wasn’t part of the administrative machine! It was the machine running between departments, running between patients, fully understanding how everything worked. That experience is extremely valuable today. Now, when I think about decisions I make [as a leader] I understand the implications of those decisions and I understand the effect of when something happens. No experience is ever wasted, but sometimes you don’t know at the time why it’s going to be so valuable; Just take it and appreciate it. If you believe you’re in the wrong place, be thoughtful—not reactionary–about how you move to the next one.”

“Being a woman has been an asset to my leadership style. Every leader has their own style. Stop worrying about everyone else and be the best you. If you’re a woman, be the best woman you can be because it’s a gift.”

“People who are in pain, so desperately want someone to help lift it or acknowledge it. When we pass by and act as if nothing happened, that’s even more painful. If you have the chance to acknowledge the pain, it’s always appreciated.”

“To acknowledge the whole person and what’s going on with them is very important. When you talk about what’s going on in our society right now, where people are feeling isolated and alone, this is part of it. Communities were once better at holding each other up and we need to bring that back.”

“All the evidence suggests the importance of human interactions and human feedback. Often it’s the unofficial moments that are the memorable ones.”

“Often our disappointments are our best opportunities. As human beings, we learn through failure and trial more than we learn through success.  [Successful people] don’t see failure, they see what’s the next thing to learn and how to apply it.”

“The way you learn what you’re good at is by doing something and feeling the energy or lack thereof.  Continue to pursue the roles that give you energy–the ones that give you success and traction.” 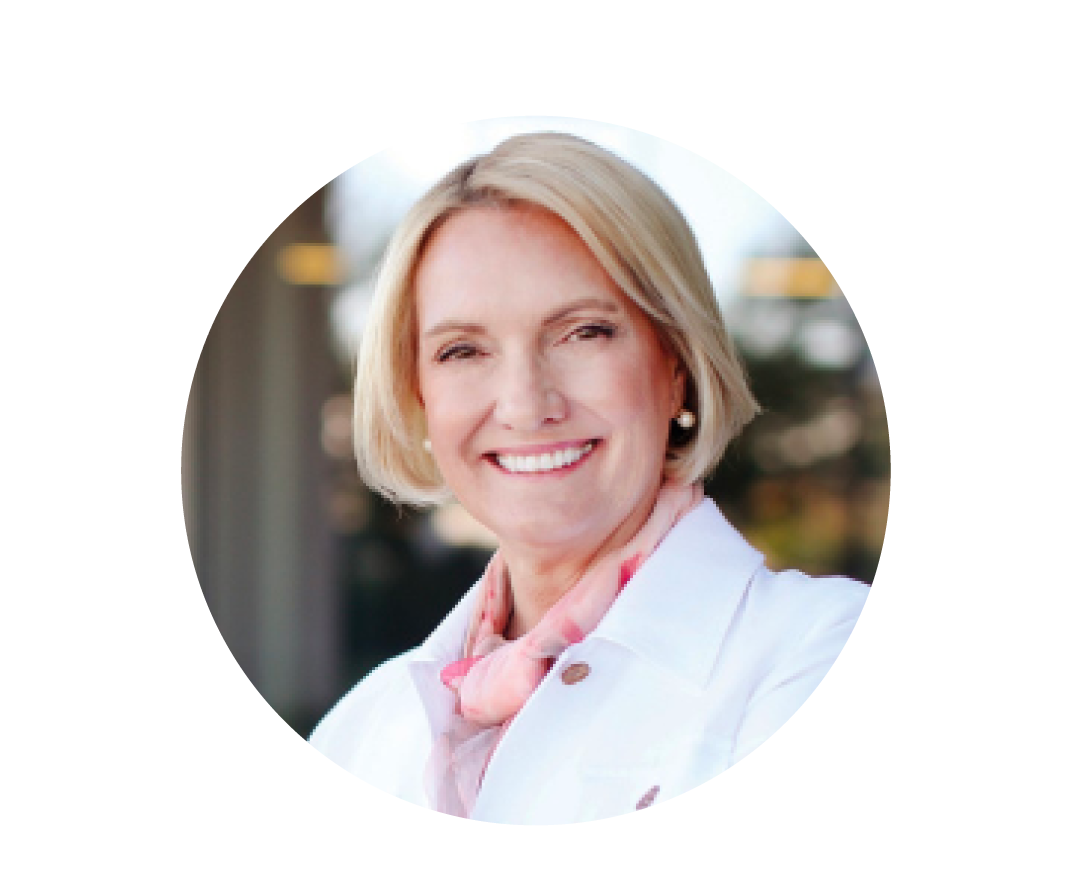 Moments Move Us is a podcast hosted by Rebecca Coren, CEO of Wambi. 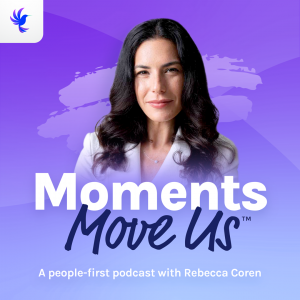