On September 29th, Wambi had the second opportunity to host an incredible panel of leaders representing some of the largest health systems in the United States to share their experiences improving the employee experience through the pandemic. We gained some detailed insights on how they have engaged their employees despite the surmounting stress and what lessons they learned navigating these uncertain times. We heard about things like: increased visibility, frequent communication, implementing new quality measures continue to raise employee support, creative ways to connect with employees, (and so much more). They also made mention of how crucial the positive response from the community was in encouraging employees.  The key takeaway: people have long memories and the support and investment in staff through the crisis will have long-term impact.  Each of these leaders inspired us with their positivity and willingness to show up for their teams. For those looking for more insights, we encourage you to watch the recording. 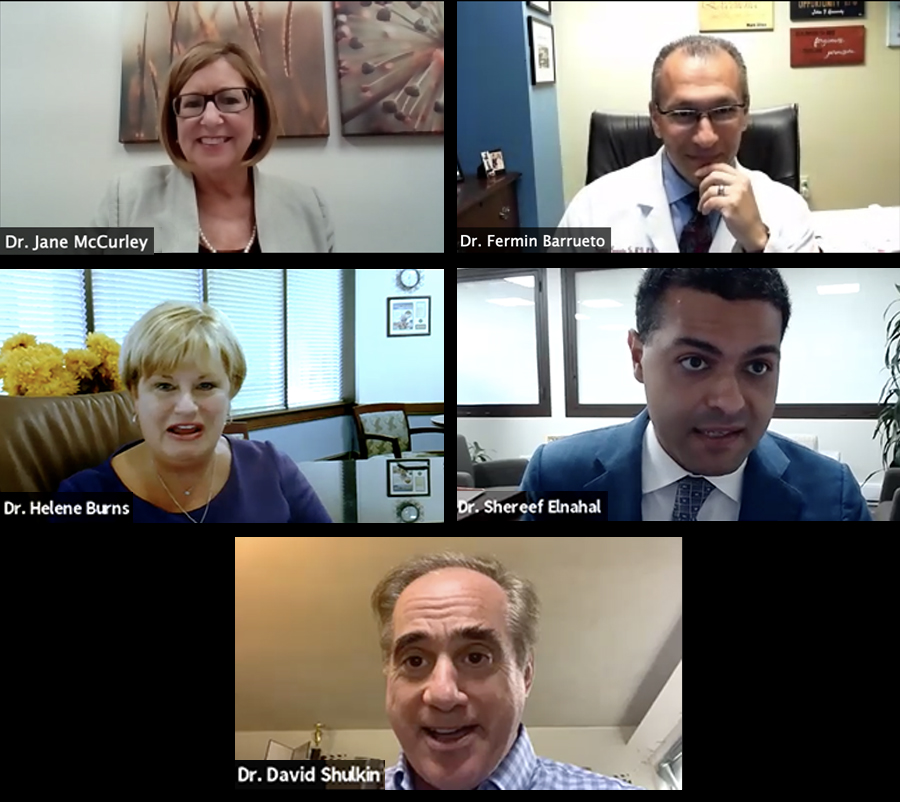 In this role since 2013, Dr. Burns led her organization to receive its first Magnet Designation® in 2018. Dr. Burns has overall responsibility for patient care services and nursing operations at the multi-hospital New Jersey division of Jefferson Health, with oversight of its more than 1,400 RNs and Department of Nursing staff. Dr. Burns has direct oversight of patient safety as it relates to nurse-sensitive indicators, e.g., patient fall rates, readmission rates, catheter-associated urinary track infections, blood stream infections, ventilator-associated pneumonia rates, sepsis rates, and pressure ulcer rates.  She collaborates with the medical staff and administrative teams leading High Reliability initiatives as they relate to patient safety.

Dr. Fermin Barrueto has been the Chief Medical Officer at University of Maryland Upper Chesapeake Health (UM UCH) since July 2016. Prior to this appointment, he had served as the regional director and chair for the Department of Emergency Medicine at UM Upper Chesapeake Health since 2008. In this capacity, he oversaw the emergency departments at UM Upper Chesapeake Medical Center in Bel Air and UM Harford Memorial Hospital in Havre de Grace. Double-board certified in emergency medicine and medical toxicology, Dr. Barrueto also served as a clinical associate professor for the University of Maryland School of Medicine Department of Emergency

Dr. Elnahal has served in the CEO role at University Hospital, the State’s only public hospital and its largest safety net hospital, since July 2019.  Prior to his time at University Hospital, Elnahal served as Governor Murphy’s first Commissioner of Health. Elnahal has led University Hospital throughout the COVID-19 public health emergency.  The hospital has served as a model for urban hospital and regional response efforts, developing protocols for expanding capacity, regionally coordinating patients, maintaining PPE supplies, adapting policies, and conducting clinical trials and research.

Jane joined HCA as a Chief Nursing Officer in 2003 and was recently promoted as the Chief Nursing Executive this year.  Prior to her corporate role she was at St. David’s North Austin Medical Center (SDNAMC). Her leadership as CNO was instrumental in advancing that organization to unprecedented levels of clinical success and national recognition.  During Jane’s tenure, patient care advances contributed to the facility’s Neonatal Intensive Care Unit (NICU) earning the Beacon Award for Excellence in Critical Care Nursing (the first in Texas, and the first HCA NICU to receive the award). In 2016, the hospital’s Medical Surgical Nephrology Specialty Unit received the PRISM (Premier Recognition in the Specialty of Medical-Surgical Award), from the Academy of Medical-Surgical Nurses, another first for HCA. Jane serves as the president-elect of the Texas Organization of Nurse Executives (TONE) and is the 2014 recipient of that organization’s Excellence in Nursing Leadership Award.

Listen to Dr. Shareef Elnahal’s “Taking The Time to Connect” episode on the Moments Move Us podcast. 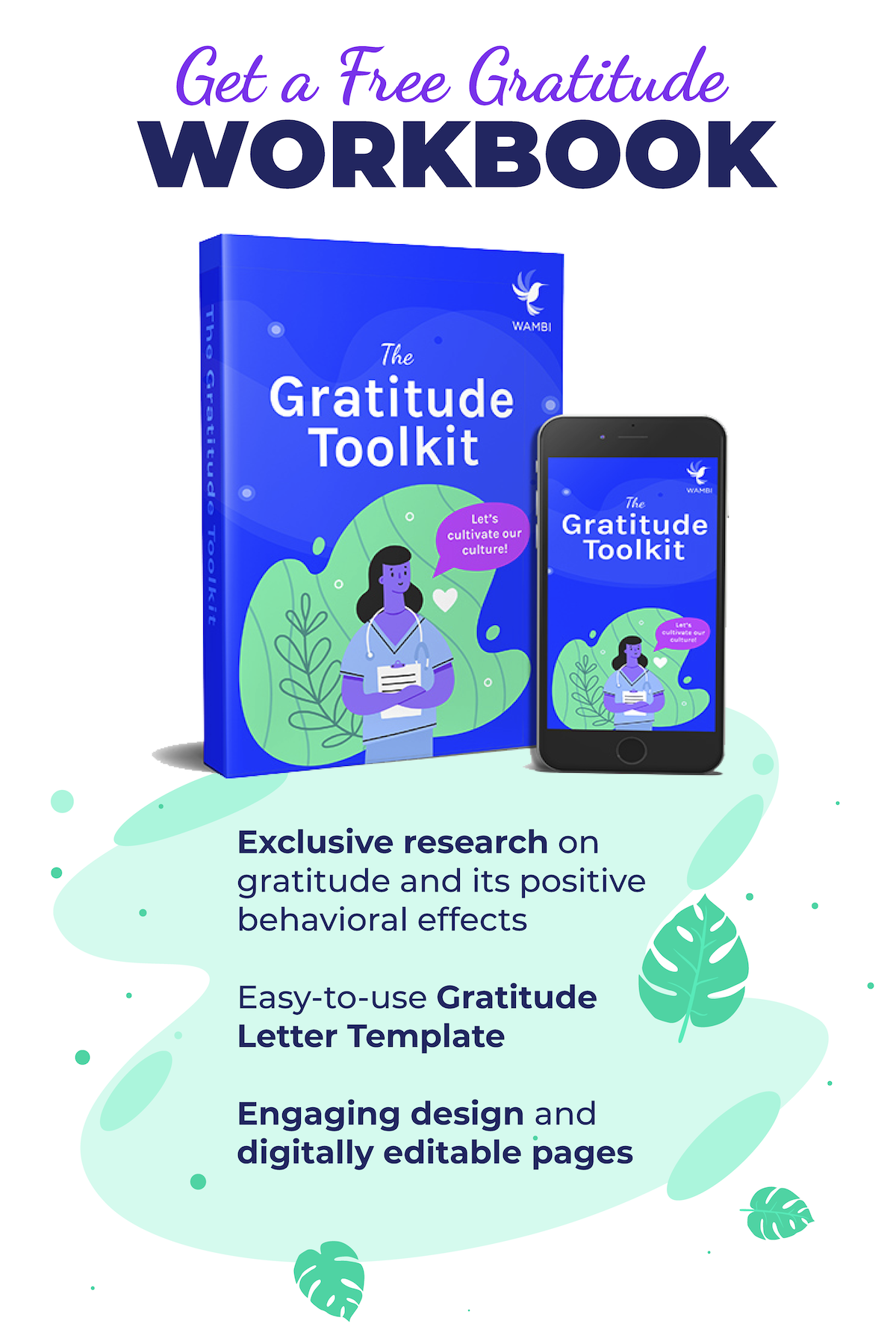 Wambi specializes in creating workplace cultures of gratitude and positivity.

We have put together a free Gratitude Toolkit, a 10-page editable journal filled with reflections, educational teachings, and exclusive research.  Use it at your next team break or independently.

Get The Gratitude Toolkit today!

Advocate for the voice-less and those with needs

Dr. Sophia Thomas, a family and pediatric nurse practitioner at the DePaul Community Health Center in New Orleans and is the President of the American Association of Nurse Practitioners. Listen as Bonnie and Sophia discuss the importance of mentorship and bringing up others and recognizing the little things in others to model infectious good behavior.

Pay it forward with recognition.
Love this? Explore the series.

How To Practice Gratitude At Work
Friday, 18 September 2020

Gratitude has been defined as a strength, a memory of the heart, a pathway to greater health and well-being, and the parent of all virtues. Gratitude is linked to many benefits across the well-being spectrum, including physical, mental, emotional, and spiritual. Research shows regularly reflecting and expressing gratitude leads to the following:

… and more! Living gratefully leads to stronger bonds with colleagues, more satisfying relationships with your loved ones, and greater resilience in the face of adversity and trauma. It gives you hope, strength, energy, wisdom, and the serenity to meet life’s many challenges of grief, anxiety, depression, loneliness, and fear. Gratitude is the foundation of abundance and joy. 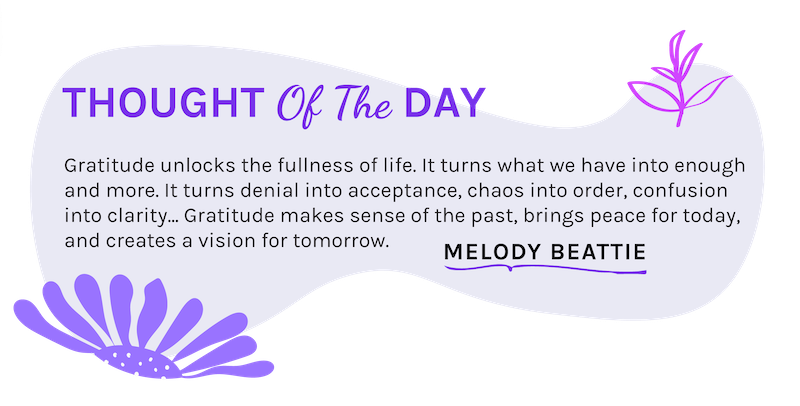 How does gratitude benefit your way of life?

Keep in mind that practicing gratitude is much more than merely feeling thankful. Gratitude reflections and expressions about what’s good in life contribute to both your and other’s overall health and well-being.

Once you begin your journey towards leading a more gratitude-filled life, the results of having a grateful perspective can help you cope and build greater personal resilience, which is especially important to your professional success.  Thanks to your brain’s neuroplasticity, practicing gratitude will strengthen existing brain pathways and create new ones! Gratitude also creates an awareness of what is going well in your life, your positive emotions, your positive relationships, and your well-being combined, to enable you to truly flourish. When we are stressed out, gratitude offers a less negative impact on emotional health and a greater ability, mentally, to bring some closure. A grateful outlook can help promote the healing of troubled memories that arise from your negative experiences. Think of expressing gratitude as a technique to block the release of the stress hormone, cortisol. The number of positive health benefits that can be achieved through the consistent practice of gratitude include better quality and duration of sleep, lower blood pressure, and a stronger immune system (Wood, Joseph, Lloyd, & Atkins, 2009). It is important to note that building a discipline of gratitude takes commitment and is cultivated over time. In order for you to live a life filled with gratitude, you must bring your actions into focus.

How To Practice Gratitude at Work

In times of extremely disruptive and uncertain events like the COVID-19 pandemic, it may feel like practicing gratitude is unachievable.

But if we look through the lens of gratitude and seeking the positive in what can be an uncertain and difficult time, we’re bound to find all the good along the way. Now if you’re asking, “well, how can I/we practice gratitude at work?” The answer is quite simple: ways to practice gratitude include reflecting, expressing, and receiving gratitude.

To support all our healthcare workers, we have created The Gratitude Toolkit, a free 10-page workbook with exercises, resources, and educational teachings to provide guidance on purposeful ways to practice gratitude at work.  You can either print the workbook or complete the exercises using the editable fields on-screen to reduce your carbon footprint. Feel free to share this resource with your employees, supervisors, colleagues, and friends in healthcare!

Get a copy of your free Gratitude Toolkit today!

What's Inside The Gratitude Toolkit

What are the topics covered in the gratitude toolkit?

You will also find a Gratitude Letter Template on page 8. The gratitude exercises in The Gratitude Toolkit were designed to help you continue to build your reserve of resilience: a personal ability that enables you to rebound and recover from the inevitable negative impact of this crisis.

As you work through this workbook, observe the meaningful moments of your life. These observations are gratitude in application. May this workbook help you practice gratitude at work while also also allow you to restore, rejuvenate, and heal tired parts of your heart.  The Gratitude Toolkit is a pathway to greater emotional and mental well-being throughout all areas of your life.

Let us show you how Wambi uses the power of gratitude to transform employee experience!

Dan Woloszyn has been in executive hospital leadership for 23 years, including nine years in his current role as the CEO of Rehab Hospital of Indiana (RHI). He has a unique management approach, combining servant leadership with understanding the neuropsychology of corporate hospital systems. Not only does he believe in looking at this neuropsychology from a clinical perspective, but through an administrative lens as well.

In today’s episode, you will hear how he incorporates these two philosophies into his everyday life, along with tangible examples of how to apply cross-sectional leadership to your own work.